Home
Daugavpils: the first new participant of the Alliance in 2015

Daugavpils: the first new participant of the Alliance in 2015 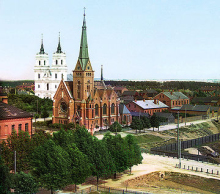 The European Alliance of cities and regions for Roma Inclusion welcomes the city of Daugavpils among its participants. Daugavpils is a city in the South of Latvia with almost 100.000 inhabitants. The work on Roma Inclusion concentrates at the level of the department of the education, which allowed the admission of 120 young Roma in schools.

In Latvia, Roma have a very long history, as they live there since the 16th century. In Daugavpils, all Roma pupils are integrated into so-called normal classes, teaching them together with all other pupils. Local authorities also drew up a project to support those students who finished the education program when they enter the labour market, by creating a social dialogue between Roma communities and prospective employers.

Daugavpils is the first participant of the Alliance in 2015 and the 125th in total.