Home
John WARMISHAM: “The Romani language is under threat”

John WARMISHAM: “The Romani language is under threat” 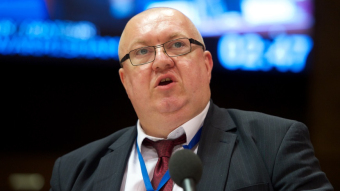 “Due to the persistent risk of racist attacks against Roma, both verbally and physically, many Roma hide their identity by not speaking the Romani language,” says John WARMISHAM (United Kingdom, SOC), Congress Spokesperson on Roma and Traveller Issues, marking the World Day of Romani Language on 5 November 2018.

“The Romani language and the Romani culture is at the heart of the European culture”, explained John WARMISHAM. “Almost every European society has been influenced by taking over words or expressions from Romani”.

“Due to the constant risk of discrimination the Romani language is under threat”, stated John WARMISHAM. He invited mayors and regional representatives from all over Europe to take a stance against the discrimination of Roma and sign the Declaration against anti-Gypsyism.

The World day of Romani language promotes education, language and culture of Roma people and supports multicultural values. It was first initiated by the Croatian Parliament in 2012 and proclaimed World Day of Romani language by UNESCO during its 38th session of the General Conference of UNESCO in 2015.