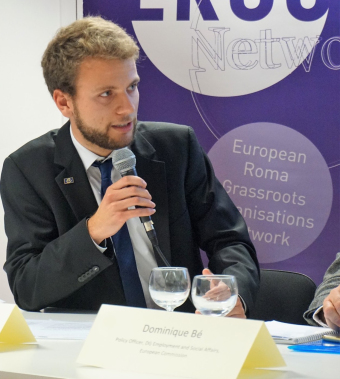 The European Roma Grassroots Organisations Network ERGO invited stakeholders from all over Europe to gather in Brussels on Monday to celebrate ERGO's 10th anniversary. The anniversary was marked by a discussion on "Roma inclusion through local partnerships".

Together with representatives from the European Union Agency for Fundamental Rights, the European Commission and local NGOs, the Alliance discussed ongoing problems and strategies. Roma Alliance Officer Tobias MAYR underlined that despite of worrying developments in some countries, "we saw significant improvements, commitment and political will in many municipalities" in 2018.

In Ukraine, Greece and Albania networks of mayors for Roma Inclusion were set up with the help of the Alliance and are currently developing. The Ukrainian network recently launched 12 individual projects in cooperation with the Roma civil society to tackle issues as early school drop out, unsufficient monitoring mechanisms or dismanteling barriers for improved labour market access.

"The Declaration is not only of interest for mayors, but likewise a powerful tool for Civil Society, NGOs and ordinary citizens", Tobias MAYR underlined: "Take the Declaration with you when you meet your local councillors next time. Ask them if they have already signed it and if not, ask why not?". He invited  participants to use the Declaration as a tool to raise awareness for anti-Gypsyism among local politicians.

The whole discussion can be watched online. Promoting the Declaration against anti-Gypsyism