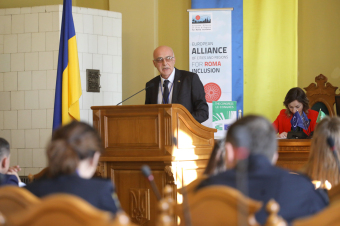 On the occassion of the 2nd official meeting of the Ukrainian Alliance of Cities and Regions for Roma Inclusion, three Councillors signed the Declaration against anti-Gypsiysm. Mr Petro PRYHARA, Member of Khust District Council, Ms Svitlana BOHATYRCHUK KRYVKO, Member of Rivne Regional Council and Mr Sergiy BASARAB, Deputy Chairman of Ivano-Frakivs'k Regional Council expressed their will to fight anti-Gypsyism in their Districts and Regions by signing the Declaration.

The Declaration against anti-Gypsyism is a document that gives Mayors the opportunity to take a clear stance against anti-Gypsyism.Signatories of the Declaration express their will to reject all forms of discrimination, violence or incitement to hate speech against Roma in their municipalities or regions. They refuse to display, publish or distribute in any way views and positions that could stir or incite anti-Roma sentiments. They declare to refrain from any political alliance building or co-operation with political parties that incite racial or ethnic prejudices. Rather they encourage members of the Roma communities to become themselves active in the political representation, as representation of ethnic minority groups is an integral part of the democratic process.

In his speech Mr RRYHARA stressed: "Many mayors, councillors and governors in Europe show a big commitment for Roma Inclusion and the fight against anti-Gypsyism. Sadly, hardly anyone knows about it. The Declaration gives us the possibility to make their engagement public."

Currently, 117 municipalities and regions from 33 member states have signed the Declaration, among them there are 9 signatures from Ukraine: The Cities of Kropyvnytsky, Lviv, Uzhgorod, Mena, Mala Danylivka, the Districts of Pereyaslav-Khemelnytsky, Khust and the Regions of Rivne and Ivano-Frankivs'k.

Mr Petro PRYHARA, Ms Svitlana BOHATYRCHUK KRYVKO and Mr Sergii BASARAB also serve as members of the Ukrainian Delegation to the Congress of Local and Regional Authorities of the Council of Europe.