The Dosta! Congress Prize for municipalities was given on Wednesday, 21 October, to Ghent (BE), Kragujevac (RS), Reggio nell' Emilia (IT) and Madrid (ES) for their efforts for Roma inclusion 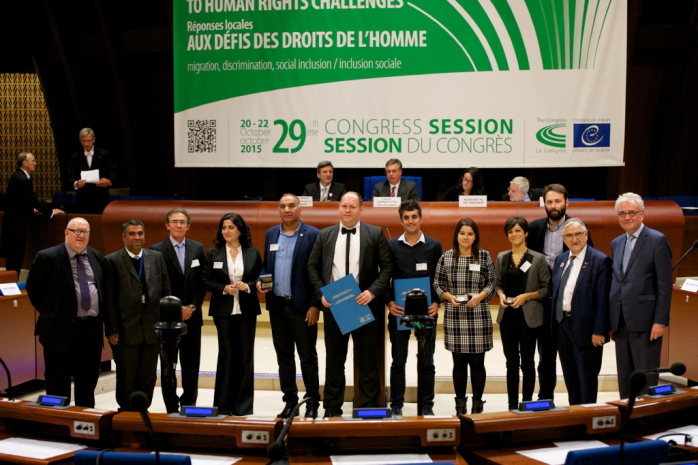 © CoE; winners of the 5th Dosta! Congress prize with members of the Jury

Four cities were honoured with the 5th edition of the Dosta! Congress Prize, an award that is given to municipalities every two years for their commitment to inclusion of Roma and Travellers. On the first place came Ghent (Belgium), tied on the 2nd place are ex-aequo Kragujevac (Serbia) and Reggio nell’ Emilia (Italy). The 3rd place went to Madrid (Spain).

Starting from the rationale that education is the most important lever for a better future, the city bolstered its education activities for Roma and Travellers with a  two-track project. The first initiative was the training of school mediators with an intra-European migration background, to overcome educational barriers for Roma families who settled down in Ghent.
The second initiative focussed on Travellers: A container classroom was set up, where short-term education is provided to the children in an interactive way, reaching 15 to 20 children per week.

The period before 3 years of age is critical for the development of the personality of a person and has a large influence on his/her health and social abilities later on in life. Kragujevac started a parenting programme to educate Roma parents about the importance of early childhood education and the role of learning and development by playing and reading, using toys, colouring books and games. Also, health, education and welfare authorities and civil society organisations received training and materials in order to mainstream early childhood education in their administration activities.

The historical institute of the city, in cooperation with the Social Service department, gave 860 students an introduction to the history and culture of Sinti and Roma, with a particular focus on the current situation and on the Porajmos, the long forgotten tragedy of the Roma Genocide by the Nazis during World War II.

The course addressed the students’ opinions and challenged their stereotypes surrounding the living conditions of Roma and Travellers in Europe. Among the various inputs was the documentary film “Men tincaraimi – Stories of the Porrajmos” and a five-day memory trip to Berlin, during which 250 students visited the former Nazi concentration camps.

A group of the city’s Roma mediators organized a series of workshops, debates and neighbourhood meetings to strengthen social inclusion within the local communities. They focussed on several aspects, such as education, health, gender equality, employment and peaceful co-existence in the neighbourhoods. In total, between 3500 and 4000 persons participated in the events in 2013 and 2014.

Jean-Claude Frécon, president of the Congress, Ulrich Bunjes, Special Representative of the Secretary General on Roma issues, and John Warmisham, the Congress Rapporteur on Roma, praised the winners for their initiatives. President Frécon stressed that “local and regional authorities, when working hand in hand with Roma and Traveller communities, can bring a real change for the better. I am happy to see here today, celebrating the Dosta! prize, how concrete and beneficial this change can be.”