The Dosta! Congress Prize is awarded biannually to three municipalities from Council of Europe member States that have implemented innovative and creative initiatives to effectively ensure the long-term inclusion of the Roma and Traveller communities within their borders, while respecting the diversity of these communities and ensuring their active participation in democratic life.

Dosta! 2019 Prizes awarded but, due to the COVID-19 pandemic, ceremony postponed to the Congress session to be held “in person” in October 2021

As the Congress Session in March 2020 was cancelled and the following ones held online due to the COVID-19 Pandemic, the three winner projects of the Dosta! Congress Prize for Municipalities will be awarded their prizes during a ceremony to be held in October 2021, during the 41st Plenary Session of the Congress, which will take place at the headquarters of the Council of Europe in Strasbourg.

The winner projects are: 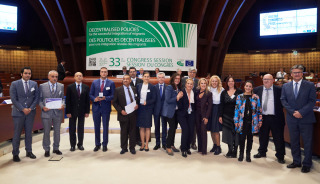 In 2017, the Dosta! Congress Prize for Municipalities was awarded for the 6th time. This ceremony marked the 10th anniversary of the Prize. Over the past ten years, the prize has proven to be one of the most important platforms for the acknowledgement of Roma Inclusion initiatives at the local and regional level. Among the seven pre-selected municipalities this year, ?i?li (Turkey) was awarded the first prize for its comprehensive measures that brought not only a variety of stakeholders to the discussion table, but also promoted active engagement through multiple actions. Volos (Greece) was awarded the second prize. This is ´Volos' second award and the only city so far that has received two Dosta! Congress Prizes. Through its ‘role models’ approach, the municipality was able to increase Roma participation in secondary education. Volos proves exceptional consistency in tackling anti-discrimination against Roma. The third prize was awarded to Gliwice (Poland) for the successful implementation of an afterschool integration centre. A long-term approach is characteristic for all three projects, as well as their focus on education. The jury was in agreement with the municipalities’ view that capacity building of Roma and Traveller children is essential for improving the situation of Roma and Travellers communities.

In 2017, the Dosta ! Congress Prize celebrated its 10th anniversary. For more information please have a look at the 2017 jubilee brochure. Four cities were honoured with the 5th edition of the Dosta! Congress Prize, an award that is given to municipalities every two years for their commitment to inclusion of Roma and Travellers. On the first place came Ghent (Belgium), tied on the 2nd place are ex-aequo Kragujevac (Serbia) and Reggio nell’ Emilia (Italy). The 3rd place went to Madrid (Spain).

The Dosta!-Congress Prize has been awarded to three local and regional authorities to recognize their excellent efforts for participatory and innovative work in combating anti-gypsyism and promoting the inclusion of Roma in political and social life. The municipality of Obrnice (Czech Republic) was awarded the first prize for a project using an integrated approach in the fields of education, housing, employment, social services, security and leisure activities. The second place has been awarded to the city of Heraklion (Greece), for its municipal program for Roma inclusion in the fields of education, trainings and anti-discrimination. Finally, the third prize was rewarded to the regional authority of Kocaeli (Turkey) for its varied campaign in the areas of education, training and culture.

The 3rd Dosta! - Congress Prize for Municipalities has been awarded to four communities as part of the Congress' contribution to the Council of Europe's Dosta! Campaign. The winners were the municiaplities of Jyväskylä (Finland) and Sur?in (Serbia), Belgrade (Serbia), as well as Southwark (United Kingdom) and Madrid (Spain), received the prize during the 21st Congress Session on 19 October 2011 in Strasbourg. The ceremony was attended by Keith Whitmore, President of the Congress, Jeroen Schokkenbroek, Special Representative of the Secretary General for Roma Issues, and Permanent Representatives from the Council of Europe member states of the prize winners.

''This year's winning projects have sought to improve Roma housing and health care, educate children, provide counselling services and create employment opportunities through vocational training,'' stressed Congress President Ian Micallef at the award ceremony of the Dosta! Congress Prize for Municipalities, on 4 March 2009. ''Such ingenuity and innovation in addressing the problems faced by Roma people, sometimes against a difficult background of prejudices and discriminatory attitudes, must be encouraged, rewarded and shared with others, which is the objective of this Prize,'' he said.