The Social Service department of Reggio Nell’Emilia, in cooperation with the historical institute of the city, gave students an introduction to the history and culture of Sinti and Roma, with a particular focus on the current situation and on the Porajmos, the long forgotten tragedy of the Roma Genocide by the Nazis during World War II.

The course addressed the students’ opinions and challenged their stereotypes surrounding the living conditions of Roma and Travellers in Europe. Among the various inputs was the documentary film “Men tincaraimi – Stories of the Porajmos”, which collects interviews of members of the Roma and Sinti community who survived the Fascist concentration camps near Modena. The project also featured a five-day memory trip to Berlin, during which 250 students visited the former Nazi concentration camps. According to Chiara Bertozzi, one of the project officers, this trip had a strong impact on the students: “We saw that these students now have a different interest and a connection with Roma.”

The project is an example of how the important connection between the past and the present can be made, by education on the history of the Roma genocide, which leads to awareness about the current situation of Roma and Travellers in Europe.

The importance of the project can be measured by the numbers of students involved in this project: 860 students attended courses, screenings and trips.

“This new generation now has much more information about culture of Roma and Sinti communities, and we worked a lot about the prejudices and the stereotypes. So we think it gave the opportunity to give a new kind of imagination of this world “optimistically concluded Chiara Bertozzi.

To go further, the city of Reggio Nell’Emilia is planning to organize a memorial walk composed of young Sinti and “gadje” (non-gypsy). 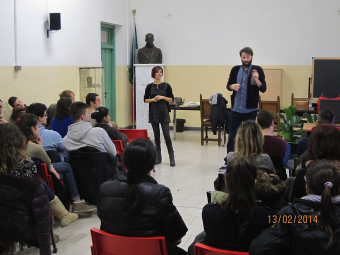